By Saturday we had walked about 12 miles around Louisville – nearly a half marathon!

We happened to go downstairs for breakfast the same time as our friends again, and over breakfast decided we would part ways during the day to get in a few things we each wanted to do, but meet up after dinner for a recap of the day.

At the Evan Williams Experience on Friday, Van and I had talked to a guy who had visited the Stitzel-Weller Distillery before Evan Williams and said it was a little off the beaten path, but worth the visit. I love to take the road less traveled, so it immediately peaked my interested. We hopped in the car and drove the few miles out of downtown through what looked to be the industrial area of Louisville, through an older less well-to-do neighborhood, over some railroad tracks and then took a left and there we were surrounded by LOTS – we found out later 18 – warehouses for bourbon barrells.

The muted sunlight of the overcast day made the rusty, worn, well-aged exteriors of them beautiful against the gray sky. I felt transported back in time, and we hadn’t even gotten out of the car.

{One of the 18 warehouses – or rackhouses – at Stitzel- Weller Distillery}

I had heard of most of the distilleries on the bourbon trail, but never of this one. As it turns out, Stitzel-Weller was the first distillery opened after prohibition, having opened on Derby Day in 1935. It “is one of the true cathedrals of the American whiskey industry” according to the Bulleit experience website, and I couldn’t agree more. 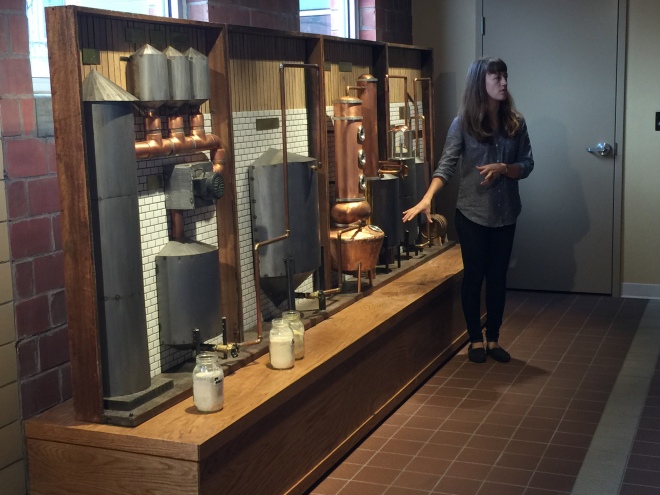 {Tour guide Cara walking us through the distilling process}

A letter from Tom Bulleit gives a short version of how Bulleit bourbon, distilled on site at Stitzel-Weller, came to be. After touring Evan Williams on Friday, the Stitzel-Weller experience was COMPLETELY different. Cara, who lead us through their process, history of the distillery, and the Bulleit brand did an amazing job making us feel like friends who came to visit their new home. The tour takes you through several buildings on the property, first where she explained not only the distilling process but the master tasting process which is how each particular bourbon the brand IS THAT particular brand…FASCINATING. It is truly an art.

Next we went into one of the rackhouses. The racking system that revolutionized bourbon production was actually invented at Stitzel-Weller. Each of the 18 7-story warehouses on the property can hold more than 18,000 barrells of bourbon…and each barrell can make 90-200 bottles. THAT’S A LOT OF BOURBON! I was totally the nerd on the tour taking notes on my iPhone. Oh, and the smell inside the rackhouse – the oak, the fresh air, the sweet vanilla-y smell of the aging bourbon. It was sensory overload.

We were also able to visit the original shop where the barrels were repaired, and then back into the main house where the lobby, gift shop, and Tom Bulleit’s office is located…and finally, to taste the goods. Bulleit’s 10 Year was by far my favorite of all the bourbon’s we tasted, smooth and warm with hints of vanilla.

I highly recommend a visit to Stitzel-Weller if you have the opportunity! It is well worth the trip!

Next Van and I were off to find a late lunch. My Silla (Sister-in-law Lauren) had recommended the Silver Dollar over on Frankfort and I’d wanted to peruse over that way, so we were off navigating our way to the other side of Louisville.

The Silver Dollar is a quirky little honky-tonk restaurant with an eclectic menu inside an old firehouse. Very fun. The color scheme was all in red and turquoise (LOVE), and we made it in time for brunch. They have a fabulous cocktail menu and Van and I were both adventurous – when in Rome – errr in bourbon country, right?

For lunch I had a variation of a BLT with gouda, carmelized onions, an egg and a fried green tomato, served with house made potato chips…. AMAZING. It was all kinds of ooey-gooey goodness.

Then Van and I wandered a little more through this cute artsy area of Louisville.

Before we headed back to the hotel we spotted a pink building which turned out to be the Comfy Cow Creamery, which we found out was  #2 on BuzzFeed’s List of 27 Ice Cream Shops You Need to Visit Before You Die.

O.M.G. The decisions…thankfully they offered an ice cream flight: three small scoops so you can try different flavors. I opted for Brown Butter Peanut Brittle Ice Cream, Bourbon Ball, and Southern ____ (something – i can’t remember the second word). The Peanut Brittle flavor won the World Dairy Expo for 2015….it was by far the best ice cream I’ve ever tasted. Ice cream infused with brown butter, then mixed with chunks of peanut brittle. WOWSERS. The Bourbon Ball was vanilla with bourbon ball candy. Delightful but no comparison to the sweet-salty perfection of the peanut brittle flavor. Running a close second though was the Southern ____ flavor: bourbon flavored ice cream with pecans and chunks of pecan pie. Holy southern goodness.

…and then I walked into the bathroom…

I don’t normally go around taking pictures of the inside of public restrooms, but I think you can all see why this ice cream parlor was just…well…fate.

If you’re ever near Louisville – don’t miss the Comfy Cow or the Stitzel-Weller tour!!

With the day winding down, we headed back to the hotel. Van wanted to catch part of a ball-game, so I had him drop me off a couple of blocks from the hotel in an area known as South 4th. There were several adorable shops filled with handmade goods, polite shop employees and owners chatted with me about the city, the football game, and their stores. Again, Louisville impressed me with her hospitality.

Having had fancy food the night before, Van and I went for local burger-ish fare for dinner and a location where we could watch some football. (It was, after all, a Saturday in the fall). We walked from the hotel to a local sports bar and were able to take in this beautiful sunset.

To round out the day, we met our friends at the Seelbach where I had a Seelbach (seems only fitting right?)…and compared adventures from our day. A great end to a great day with great friends.

One more day to go! We managed to fit in a couple of more mini-adventures on Sunday en route home… stay tuned

Please visit the online art gallery {Art by LAC} and Etsy Shop too!

What are you looking for?

Not so long ago

Once upon a time