Clemson By the Numbers | By Drew Carlisle 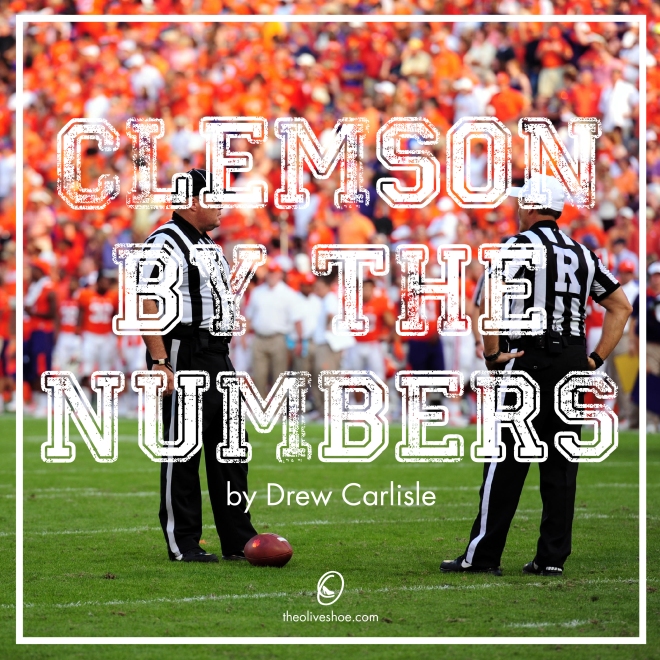 With just under seventy-two hours until the Clemson Tigers face the Alabama Crimson Tide with hopes of winning just their second national championship in the program’s history, we give you some interesting and significant numbers to digest as we reflect on how Clemson has arrived in this position and what can be accomplished if they should emerge the victors in the desert on Monday evening.

The Clemson team is one of the youngest of the college football landscape this season, with a total of forty freshmen and redshirt freshmen on their roster entering the 2015 season. These newcomers have collectively made innumerable contributions to Clemson’s undefeated run: Mitch Hyatt, who seamlessly assumed a starting role on the offensive line after Isaiah Battle was dismissed from the team; wide receivers Ray Ray McCloud, Deon Cain, Trevion Thompson, and Hunter Renfrow – a walk-on who earned a starting position amid one of the deepest and most talented position groups in the country; Greg Huegel, who took over the starting position at kicker when projected starter Ammon Lakip was suspended for drug charges before the season. Even as recently as the semi-final against Oklahoma, national pundits were enamored by defensive tackle Christian Wilkins, who has created havoc for opposing offenses all season and caught a pass from punter Andy Teasdall on a fake punt, as well as defensive end Austin Bryant, who embraced the “next man up” mentality when All-American Shaq Lawson was sidelined with a knee injury during the first series of the Orange Bowl.

One of the major concerns for Clemson entering this season was the experience it was returning. While fans and coaches alike were confident that the talent was there, the lack of experience was glaring. Clemson only returned nine starters from the 2014 team, and had lost an astonishing nine starters from its defensive unit. Clemson featured just ONE returning starter collectively on its offensive and defensive lines entering the season.

Deshaun Watson is 17-0 as a starter in games he has finished. His only loss as a starter came against Georgia Tech in 2014, when he suffered a knee injury in the first quarter and would not return.

Dabo Swinney has victories over seven coaches that claim a national title during their careers and has claimed a defeat over a new champion head coach each of the past four seasons. He has yet to add a new pelt to his trophies this season, with one more opportunity against the most decorated active head coach in college football.

Clemson boasts the 7th best total defense in the country entering this game. Among Alabama’s opponents this season, only Wisconsin (3rd) and Georgia (6th) rank higher. Neither of those programs countered with an explosive offense, finishing at 80th and 77th in total offense, respectively.

Clemson also holds the 11th best total offense ranking in the country entering this game. Only Ole Miss (10th) holds a higher ranking among Alabama’s opponents this season – the only team to defeat the Crimson Tide in 2015. Ole Miss ranked 54th in total defense. Without a doubt, Clemson presents the most complete team that Alabama has faced this season – no other team they have faced has been ranked inside of the top 35 in both total offense and total defense.

The listed weight of Christian Wilkins, Clemson’s freshman defensive tackle. In the semi-final game against Oklahoma, Wilkins caught a 31-yard pass from punter Andy Teasdall on a dually route – err, wheel route – on a fake punt in the second quarter. 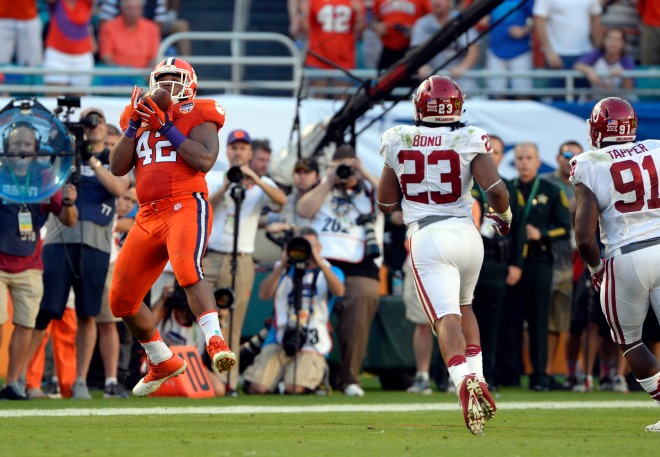 In six of its last seven games, the Clemson offense has posted 200 yards passing and 200 yards rushing. In the history of the football program, Clemson has never lost a game when accomplishing that feat, holding a record of 75-0-1 when surpassing 200 yards on the ground and in the air.

The Tigers have also amassed at least 500 yards of total offense in ten consecutive games, a school record. The program is again undefeated when accomplishing that statistic, holding an impressive 95-0-1 record when eclipsing 500 yards gained.

Clemson is seeking its 18th consecutive victory, the longest standing winning streak in the FBS subdivision. Clemson took over this active streak when Ohio State lost to Michigan State in November of this year. The Tigers program still has quite a bit of work to do to set the all-time record – in fact, they would need to not only win Monday, but complete a three-peat of undefeated seasons (and by default, national championships) through the 2017 season to surpass Oklahoma’s record of 47 consecutive wins from 1953-1957.

A victory over Alabama would give the Tigers five victories over teams ranked in the top 10 of the final College Football Playoff Rankings, having already toppled #4 Oklahoma, #8 Notre Dame, #9 Florida State, and #10 North Carolina. No other team can, or has, accomplished more than two.

Winning Monday would give the Clemson Tigers victories over four of the six teams with the best all-time records in college football history in the last four years (Alabama, Ohio State, Oklahoma, and Notre Dame) and ten of the top 19 programs. They have not had the opportunity to play the other nine programs during that span.

With a victory versus Alabama, Clemson can become the first major college football program to accomplish 15 wins in a single season in the modern era. Florida State was the closest to accomplishing this task in 2014, but fell short in a loss to Oregon in the College Football Playoff semi-final last season.

Without question, the 2015 season will be one of the most memorable for the orange-clad faithful and will cherished and retold for years to come. However, around midnight on January 11th, the Tigers have the rare opportunity to push through the threshold of being arguably the greatest team in 2015 and cement their case as one of the greatest teams in college football history, immortalizing their program and adding to a list of unprecedented accomplishments that can never be taken away.

Drew Carlisle is the  Mid-Atlantic Regional Field Manager of GradImages, Clemson Alumni (’07) and fan, creative writer and father to two adorable girls. He is husband to Lauren Cop, featured writer, and brother to Lauren James. 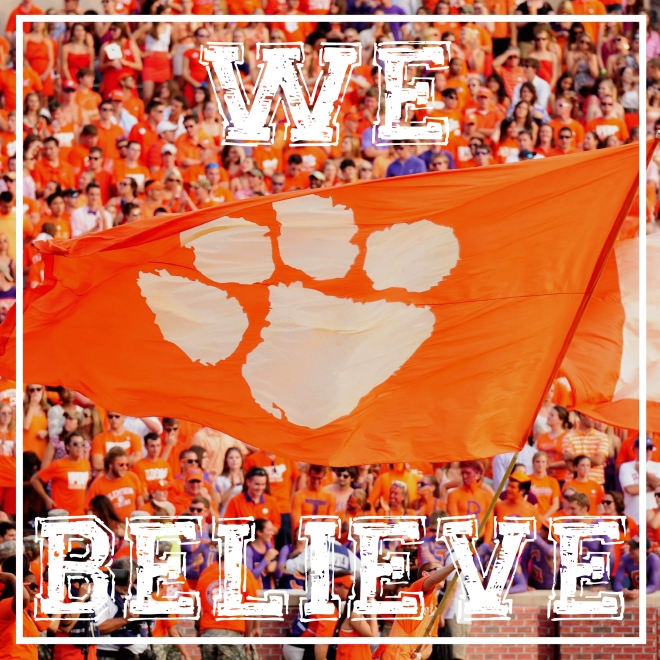 What are you looking for?

Not so long ago

Once upon a time